How To Find The Right Type of Vocal Booth

In today’s world, if you are a voice actor or into audio recording, you no longer have to worry about getting into a car, driving through traffic. traveling far or even fighting for a parking space to get into a studio to do a recording in their vocal booth. In fact, all you really need is a quiet place to do it. However, that place also has to be an acoustic environment that would benefit your recording — either your music or voice-over.

What this means is that you need to invest in your own vocal booth — preferably one that doesn’t require much construction or money. But how do you know what kind of vocal booth to get?

Why Do You Need A Vocal Booth?

A vocal booth helps in creating a more controlled recording. Vocal booths greatly reduce and can possibly eliminate current background and/or outside noise. This will allow you to sculpt vocals, instruments and test materials without unwanted ambient noise.

But how do you choose one? What size should you get? How much soundproofing do you need? Would you need to travel with the vocal booth or will it become a permanent fixture in your house or apartment?

There is no official classification of vocal booths, but in general all sound isolation enclosures such as sound booths or vocal booths (which are basically synonyms for the same thing), can be organized in three basic groups.

Three Types of Vocal Booths Available on the Market

1 Permanent Vocal Booth —These booths are professionally built recording studios and Do It Yourself (DIY) projects, such as converting bedrooms into a vocal booth or a basement into a recording studio. Such booths become a permanent fixture and cannot be removed from the premises. These booths can require major construction and become pricey.

2 Modular Vocal Booths —Manufacturers do not use the term modular to describe their booths. Instead, they use words like mobile vocal booth or portable vocal booth or portable sound booth to emphasize the difference from permanent sound isolation enclosures, which cannot be moved.

In essence, these are prefabricated booths from a factory. And, just like modular homes, these vocal booths are ready to be assembled upon delivery. It takes about 2 to 3 hours with 2 to 3 people to assemble such a modular vocal booth. The major advantage of these booths is that they can be easily disassembled, transported and reassembled in a new location.

Manufacturers also call them vocal booth portable, but portability is limited. Portable implies that something can be easily transported without major disassembly efforts. Most of such booths have casters, and it is possible to move them from one side of the room to another. The booths also can be disassembled, moved on a truck and then reassembled in a new location. The modular vocal booths come in different shape, sizes and also in different degree of soundproofing (level of ambient noise reduction).

3 Portable Vocal Booths -These are the true portable or mobile sound booths that you can take with you when you travel, whether in a car, train or airplane. These mobile vocal booths are light enough and small enough to be carried by just one person. Portable vocal booths, like the Carry-On Vocal Booth, usually are built as small enclosures or just screens that create a beneficial acoustic environment around a microphone by reducing the reverberation and cancelling echo. These booths are great for a road warrior — allowing voice actors to be able to make great recordings just about anywhere. The obvious limitation is that they cannot provide a complete enclosure. Because they are easy to take from one place to another, these portable booths are great for the seasoned voice actor but also for the newcomer who may want a vocal booth that is high in quality but not in cost.

A New Type of Portable Vocal Booth is Lightweight, Affordable and Convenient

Using a vocal booth is essential for a voice actors success, but the choice of a vocal booth really depends on the intended use and budget.Â  As 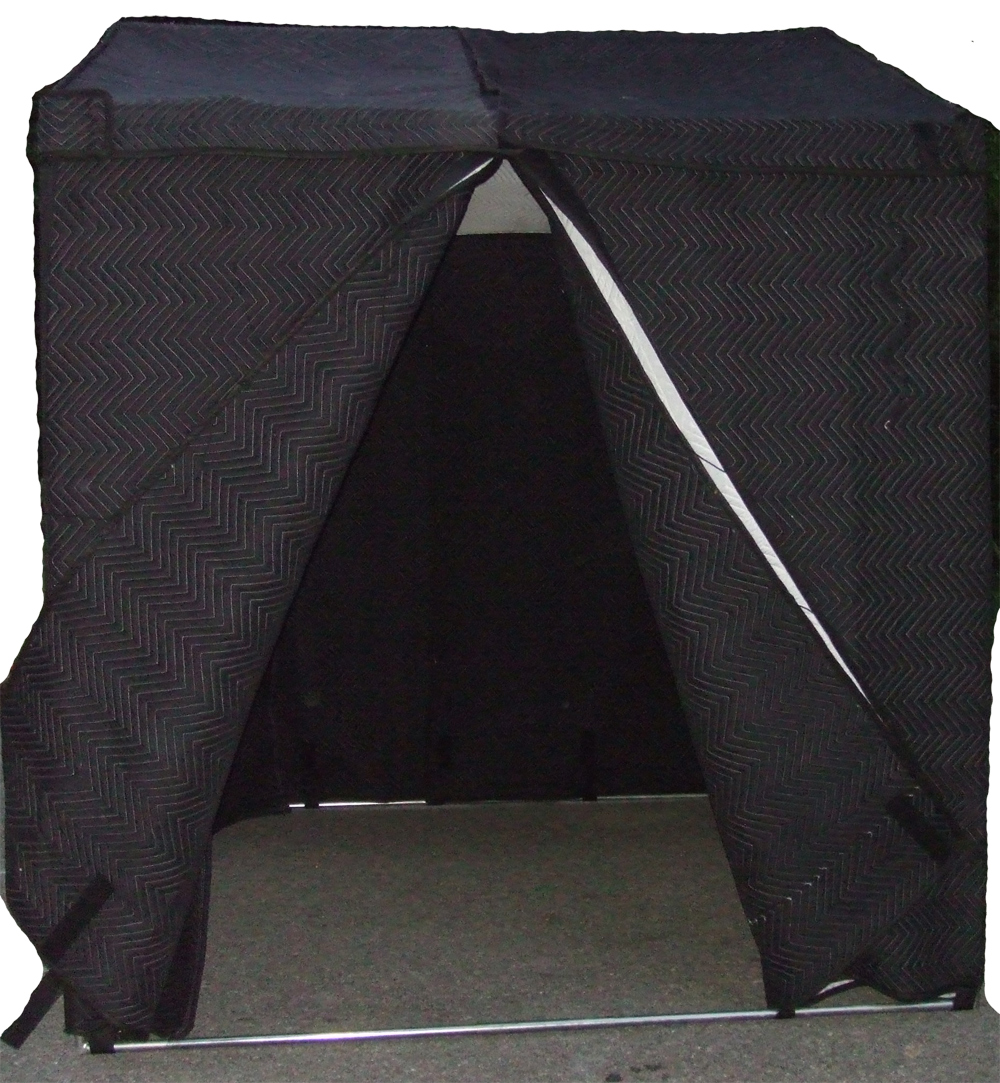 a rule of thumb, the more soundproofing you require, the more expensive it will get.

Recently, a new kind of vocal booth was introduced at the VOICE2012 Conference in Anaheim. These booths, which are designed by VocalBoothToGo.com, are in between Modular and Portable. Although these booths, are full-size walk in vocal booths, these new booths can be easily assembled in 20 to 30 minutes by one person and transported in a regular-size car! Â With a sound block layer, these vocal booths provide a level of soundproofing comparable with the modular sound booth but folds small enough to be tucked under a bed.

Setting up a vocal booth in your home or when you travel should never hinder your work or your personal life. In fact, a true portable vocal booth should make your life, as a voice actor, easier and less stressful by helping you gain better control of when and where you conduct voice over recordings.