Voice acting has become a huge faction of acting nowadays. Between video games, cartoons, podcasts, movies, and more, we have relied on actors to provide no more than their vocal prowess to convey a character or role. Vocal Booth To Go wants to celebrate 20 talented voice actors from different mediums in hopes to show the importance of voice acting in today’s society. If you want to learn more about the beginnings of voice acting, please read our history of voice acting here. 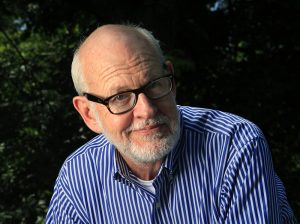 Our first voice actor is someone who has done notable roles from our childhood that are still big today. From a wise teacher of a space rebel fighter to a furry blue cookie fanatic to a sassy piglet fashionista, he has forever imprinted on our hearts and memories. This wonderful voice actor is none other than Frank Oz.

Frank Oz, full name Frank Oznowicz, was born May 25, 1944 in Hereford England. He moved to Oakland California with his parents and brother when he was six. Frank was considered a shy child, and since both of parents were amateur puppeteers, Frank found puppets were an easy way to express himself. During his adolescent years, he even worked as an apprentice puppeteer at Children’s Fairyland, a storybook theme park in Oakland. While Oz was still in high school, he had a chance meeting with 23-year-old Jim Henson at a puppeteering conference. “He was this quiet, shy guy who did these absolutely amazing puppets that were totally brand new and fresh, that I had never been seen before,” Oz later recalled about Henson. At age 19, Henson asked the young puppeteer to join his Muppets team. 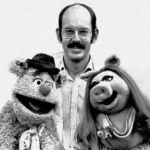 He first started as playing Rowlf the Dog in a variety of appearances. In fact, on one guest appearance on The Jimmy Dean Show, Jimmy Dean introduced him as “Frank Oz…,” mumbling the last part of his name. This is how Frank stuck with abbreviating his last name. When the Muppet Show started, he went on to play a variety of Muppet characters such as Miss Piggy, Sam Eagle, Animal, Fozzie Bear, and The Swedish Chef. 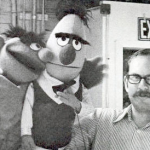 On Sesame Street, Frank Oz originated the characters of Bert, Grover, and Cookie Monster, and performed them exclusively for nearly 30 years.(1) He was also offered the role of Big Bird, but Oz declined due to his discomfort and hatred of playing in full body puppets. 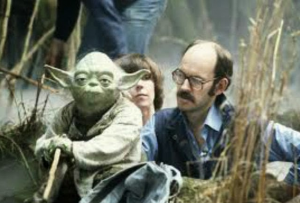 In 1980, George Lucas contacted Henson about a puppet character he wanted for his next Star Wars film, The Empire Strikes Back, a creature known as Yoda.(1) Since Henson was pre-occupied, Oz was assigned as chief puppeteer and as creative consultant, while other Henson alumni worked on the fabrication. Oz had a great deal of creative input on the character. Oz also made the key choice himself for creating the character’s trademark style of reversed grammar. Originally, Frank Oz was only supposed to provide the puppetry, with somebody else providing the voice, but at the last minute, Lucas decided to use Oz’s voice. Oz would go on to perform Yoda in all of the sequels and prequels (the latter of which used a CGI version of Yoda), and returned as Yoda in an episode of Star Wars: Rebels.

Even though Frank Oz’s passion was puppeteering, it was his voice acting that truly brought the characters to life. In a 2000 interview, Oz said,

“I’ve made a policy over the last 15 years of not having any pictures with my characters and I, at all, in the same shot. That is because, as a director, I can walk on a film for 18 hours a day for a year — work my ass off — and people will see it and say “Ah, yeah, that’s nice. That was a good film”, Then they see one picture of me and one of my characters, and they go ape****. They’ll freak out and say, “You do that character!” The power of the Muppets, and the popularity of these characters is so iconic in people’s lives, that I’ve had to distance myself from it publicly.” (1)

This is why Frank Oz will always be one of the most iconic and talented voice actors in film, and puppeteering, history.

Here is an old interview with Frank Oz back from 1976.