My background is in performing, recording and mastering, but over the last two 2 years I’ve been doing more live sound due to my mixer beta testing.

One issue that I have encountered as well as many other sound engineers and musicians is bad venue and stage acoustics. I have played gigs that moving one foot on stage resulted in not being able to hear oneself. I started thinking what could live performers do to alleviate these acoustical problems considering that one could not alter the physical structure of the venues or stages. After much research, I discovered VocalBoothToGo’s Producer’s Choice acoustic blankets.

I decided to purchase one blanket to test. I had no experience in acoustic blankets but I did have experience in studio acoustical foam usage. After a few tests in my recording studio I decided to try the blanket in a live situation. Hanging the 6′ x 8′ blanket behind my drummer in an extremely bad acoustical sounding venue produced good results. The early reflections from the drums, amps and monitors were reduced resulting in a cleaner stage and PA sound. Two sound engineers were attending my gig that was familiar with the venue and its acoustical problems also heard a noticeable improvement. 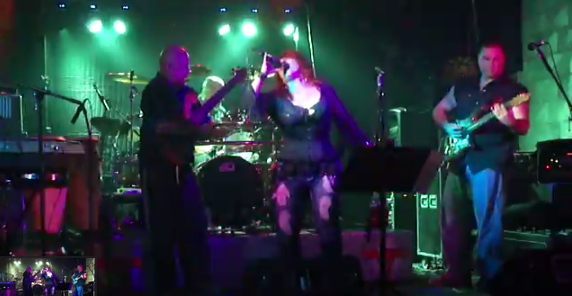 I decided to purchase a 2nd acoustic blanket and try it on a stage, which had a back wall made of brick and glass. The side walls were also brick and the physical stage was made of plywood with no carpet and stood four feet tall. It was an acoustical nightmare. I hung the two blankets behind my drummer which resulted in a 12′ wide by 8′ tall section of the back wall being covered. The back wall was close to 18′ wide. The results were amazing — there were hardly any reflections on stage. This resulted in an improved PA sound, no feedback and a better performance for me and fellow musicians.  I was running sound from the stage on that gig, the blankets made my job much easier which allowed me to focus more on playing then sound. The owner of the venue and routine customers heard the difference in my band’s sound quality which resulted in getting booked again. 🙂

My goal is to continue to test the Producers Choice acoustic blankets in a variety of live performance scenarios. I would love to be able to wrap a stage one gig — the entire back wall and two side walls.

Considering the cost of a single blanket, one could easily create an entire mobile acoustic treatment system that could be used in numerous live performance scenarios and not break the bank.