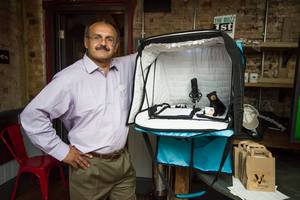 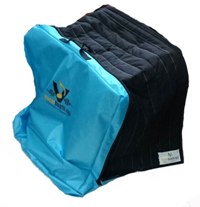 We also heard from the users of such booths, professional Voice over actors, unhappy about the boominess and boxiness of the recording. The space inside the booth was very limited, which resulted both in bad acoustics and great inconvenience, because there was no place for the script so actors had to look away at the script, which did not make for comfortable reading.
(NOTE: close proximity of acoustic foam to a microphone can create a severe high frequency depletion in the recorded audio).

Encouraged by great success of our Producer’s choice acoustic blanket material, we designed the Carry-on Vocal Booth with strong rigid support, and ample space inside to allow not only to place a script, but also place your laptop or tablet in it.  Most importantly, the larger internal space creates much better acoustics inside the vocal booth.We demonstrated the very first Carry-On Vocal booth and Producer’s choice blankets at Voice Over conference VOICE2012 in Anaheim, CA. Producer’s Choice acoustic blankets This is when our work had actually started.  Voice actors in unison commended the great acoustic quality and spacious interior of the booth, but they wanted some additional features.

We wanted to create a complete traveling Vocal recording studio, because we realized that voice actors, want to have a full set up, so they can get to work right away.
And we did all that without increasing the price of the unit! Voice actors, new and experienced, were praising the sound quality of the Carry on Vocal Booth, but as more and more users were working with it, we started getting complaints about, things like – “mounting bracket did not fit all of the microphone stands out there, the table was wobbly, the light was hard to fix, the stitching was a little off”.

We also realized that by adding all the additional gear we created clutter, that needed to be organized.

It is prettier, stronger and fitter. It is better organized and it has softer hug on your shoulders. It is practical and very stylish!

On the move it is the thinnest Vocal Booth in the world! 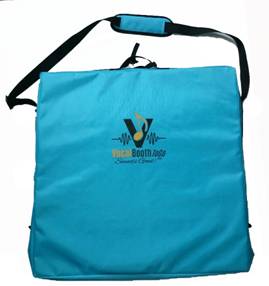 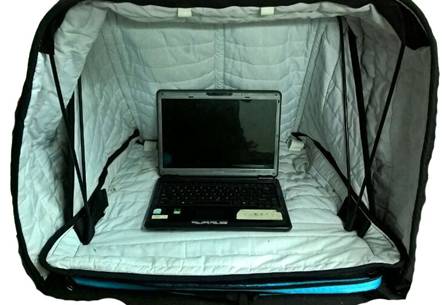 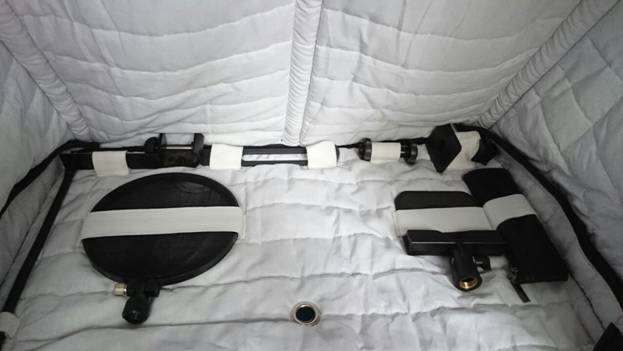 Each accessory has its own niche and we even made additional holders for microphone and pop filter.
Now you can load the traveling Vocal booth with your gear ready for anything, like a Navy Seal on a mission!
Another change we made is larger front padding, which allows to cover more of the area in front of the microphone.But when it is ready to work – it turns into a spacious recording studio ready to accept all your gear. All additional accessories are now neatly organized and stay in their place until you are ready to use them.

We redesigned the support table. it is now a little thicker to provide more reliable support on a mic stand.
The mounting bracket was redesigned as well to allow for use with thicker mic. stands.
Remember i had mentioned the  awkward light attachment?  so now we offer an easy attachment and we offer two positions for the light.  or you can get an additional light and have more illumination inside your booth.The carry bag was changed dramatically. The first most noticeable change is color. instead of  buttoned down all black, we use playful summer-sky blue color with new logo imprinted. 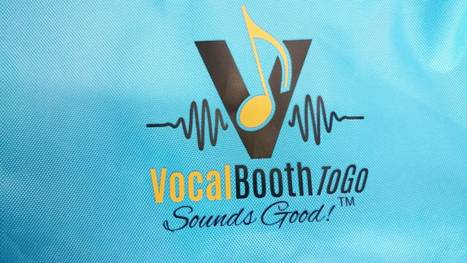 The Opening for a mic stand mounting table was changed in a way that it is a solid pocket, and not a weird flap in the middle of the bag.
We also added a shoulder pad for a comfortable carry.

In addition, we added quick-close buckles to the booth. Some of the previous cases also had the quick release buckles, but not all of them.  This feature was added by the request of reporters and journalists, who sometimes have to get going in a hurry and spending extra 15 seconds on zipping up the bag is a luxury they cannot afford.

And lastly, we are adding packaging.  As our brand becomes well known the new Carry-on Vocal Booth will come in a beautiful new box.

Extremely useful tool for a creative professional. It has an all world ball point smooth pen and 8G USB storage to keep  all your auditions or other digital files handy.