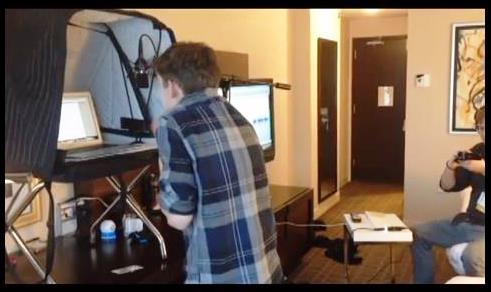 VocalBoothToGo.com presented its soundproofing and acoustic treatment products, such as the Carry-on Vocal Booth Pro, at VOAtltanta 2014, the largest voice-over conference in Southeastern United States held in March. The conference boasted speakers, leaders and presenters in the voice-over industry and included voice-over professionals, trainers, coaches, agents as well as service providers.

As an exhibitor, VocalBoothToGo.com demonstrated many of its products including the Voice Over Start-up Success Kit, Soundproofer Sound Booth SB33, Producer’s Choice sound blankets and the Carry-on Vocal Booth Pro. The portable vocal booth was put to a real-time test by a voice actor and home studio/vocal booth expert during the event. 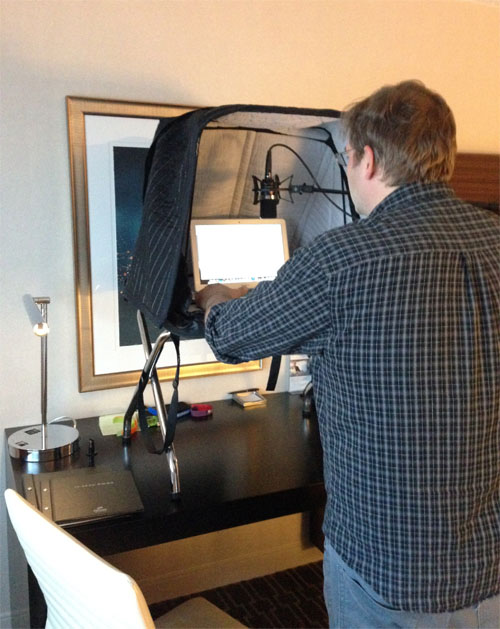 At the conference, voice actor Michael Johnston, needed to record an urgent job for a client. There wasn’t a designated area or vocal booth set-up for live voice over recording. With the help and recommendation from industry vocal booth guru, George Whittam, the voice actor used the Carry-on Vocal Booth Pro, on display at the VocalBoothToGo exhibit, and a Sennheiser microphone.

Whittam is globally considered a top authority in voice-over recording technology. He is Director and Founder of Technology of VOStudioTech.com, a division of EDGE Studio, and co founder of EWAB podcast — experts in home vocal booths and recording studios.

“We needed something convenient, portable, and quick to setup in a hotel room to reduce echo and noise while recording a vo talent for a last minute job, said Whittam. We found it [the Carry-on Vocal Booth] large enough to easily position the mic and a laptop inside, yet easy to transport and quick to assemble. It will work great for actors without the space to setup a proper booth, given their existing environment is quiet enough. ”

Whittam edited the audio track in the same hotel room where the demo was conducted.