No Space for A Vocal Booth? No Problem

According to a survey conducted in November by VoiceOverExtra, Voice actors would like to own their own vocal booth. In fact, according to this survey, next to a micr 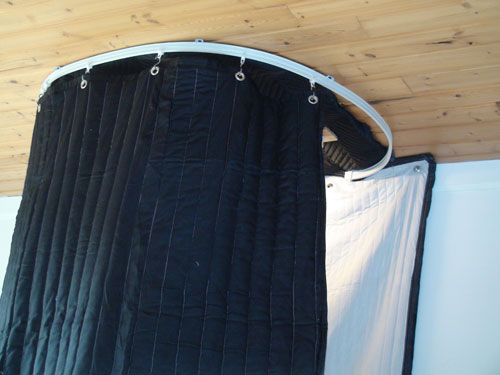 ophone, a vocal booth or an enclosed booth is the next top gear on voice talent’s wish list.

So what’s stopping voice over actors from getting one? A lack of money and a lack of space. Randye Kaye, in her blog, “Vocal Booth on Tracks: An Option for Space Challenged Voice Talents,” said that her Vocal Booth on Tracks received an “A” and was very happy with it.

“First of all, let me clarify that in a perfect VO world I get a sound-PROOF booth â and perhaps someday I will. This is not a WhisperRoom, or StudioBricks booth and is not offered as such.  This booth, however, delivers exactly what it promises. I love it.

Not in Their Budget

Not having the finances in their budget is a big reason why many voice actors reconsider purchasing a vocal booth. The expense of a full-size walk-in vocal booth is enough for some to reconsider and continue to rent studio space and time. Vocal booths can be an investment that not everyone in this industry is willing to make — especially those who work on a part-time basis or fairly new to the business.

Lack of Space for Vocal Booth

Space or lack of it is another reason why some may not purchase their own enclosed booth. Full-size vocal booths can sometimes be just too large in size for those who work in a city studio apartment or a small living area. Even those who work out of a larger area may not have the space to house a vocal booth.

Because of these reasons, voice actors resort to creating their own space in closets or corners in their homes. Sometimes these makeshift booths lead to unprofessional recordings, which can later result in an unhappy client, or even worse, a loss of a client.

Due to customers stories about the lack of space for a vocal booth (although they want one dearly), VocalBoothToGo.com has developed a vocal booth, called Vocal Booth on Tracks, that suspends from tracks mounted from either the ceiling, wall or both. The voice actor, recording artist or engineer can create any shape of an enclosed booth, utilizing corners or surrounding their present work area — and not take up any floor space at all. The sound absorption walls made out of acoustic blankets — can simply be closed and opened, much like a curtain.

This vocal booth is budget friendly too — costing just under $100 (regular price)! And, if you already own acoustic blankets, such as the Producer’s Choice Acoustic Blankets with Grommets, then you can just get the Track Kit to create your very own.

For more information on the Vocal Booth on Track, watch this video. Keep in mind that VocalBoothToGo.com offers soundproof booths too!

What is a Vocal Booth On Tracks?

What is it? It defines a vocal space where you have none, and provides excellent sound-dampening in the process. Many of us do this with moving blankets, acoustic foam, closet space, even hanging clothes â but it can look unsightly and be a pain to âundoâ in case the in-laws are coming over for dinner.

Plus, though my booth generally has great sound (part of it is an inner closet, so I just needed the other 3 âWallsâ), I felt uncomfortable even when I heard an airplane overhead â so I hoped that closing that gap between my wardrobe screens and the ceiling would be of help for those smaller outside noises (not counting leaf-and-snow-blowers).

So it was time for a change. Â I ordered the ceiling-track kit, and the moving blankets (with grommets), from VocalBoothtoGo, and they came in one big box, including all the hardware

needed. The phoneÂ consultationÂ with Gwen beforehand was great and thorough, and she recommended I order 14â² of track, though 7â² is plenty for some. My closet has double doors that open out, and I move a LOT when I voice, so I wanted the extra space.

There is a handy video that shows how to install the track. Â I am, sadly, quite a klutz when it comes to practical skills with a drill or screwdriver â and my hubby, though better than I am, is more of a computer fix-it guy than a handyman, so I bribed my brother to help.

Since you can see the installation process on the video, Iâll just share my results and impressions in this review.

Bottom Line: This product delivers exactly as promised.Â I give it a grade of A overall.

Yes â I would recommend you get someone who knows how to install stuff on the ceiling. Once itâs up there, itâs worth it!

The âsâ hooks may seem small, but they are designed so that there is no gap between the blankets and the ceiling. Once up, the blankets stay up.

Get the amountÂ of track you will need to feel free to gestureâ¦I chose 14â² and used it all. I like the extra space.

The look/ambiance of the room -(outside the booth) MUCH better! I can set my booth aside when needed, and when I close the curtains it still looks cleaner than before.

Inside the booth appearance: I feel like Iâm in a recording room now, and actually have more space than before to gesture etc.

Sound: Itâs nice and clean. To be fair, I liked the sound in my studio before too â but got extremely nervous whenever a plane flew by â even if it was at a high altitude, I could always hear it. Now I am interrupted less often by random sounds from

outside, and that makes my sessions go more smoothly. Â While the booth is not designed to soundproof, as I said, it does seem to eliminate the random smaller noises that used to interrupt my sessions. For the bigger ones â leaf blowers, snowblowers, etc. â they still get in the way. But Iâm much happier and confident in my recording sessions. The fact the the curtains go all the way to the ceiling make a difference.

My booth sound: here is a sample! a sentence or so, then some room tone:

2 Responses to Vocal Booth on Tracks: An Option for Space-Challenged VoiceÂ Talents

PrevPreviousFinding the Right Product: Do You Need A Vocal Booth or Sound Booth?
NextWhat Is The Hanging Vocal Booth?Next
Newsletter
Login / SignupMy Account